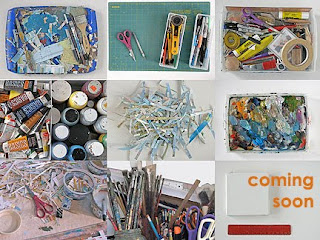 The project officially starts in two weeks. It's time to start organizing the supplies.
Posted by Tofu at 8:45 PM No comments:

A piece of art every day to create a single work made of 365 parts
The 2011 Project is conceived to bring together a set of common themes in my work and my approach to art. Those themes include:

The Process: How the 2011 Project will be created
The work will be made up of 365 smaller mixed media pieces, each 4”x4” in size. Each piece will be done as a reflection of an individual day. The intent is to create one piece for each day of the year. Ideally a piece will be done every day. Occasionally some pieces will be completed a few days following the day they are dedicated to.

The result will be a single piece of work to be made up of 365 smaller pieces. The work will be approximately 120” wide by 75” high. I will install the individual pieces, but the idea with the work is that there will be no single order in which they should be installed. The work is to be installed and shown in at least one location(s) in 2012. After the installations, the individual components will be set loose and distributed.

The Installation(s) in 2012
I have always been attracted to works of arts that are made of smaller parts that can stand alone as individual works. The 2011 Project is intended to be one of these pieces. It also should function as a map of the year 2011 from the artist’s perspective. After the pieces are shown as part of an installation, the idea is to let them loose. An effort will be made to track where they go. I see this work as a time capsule and imagine trying to get some of the parts back years later and reinstall them. The individual pieces will mainly be distributed to project supporters.

Beyond 2012
After the work has been installed and exhibited in 2012, the 365 individual pieces will be distributed. Mainly the pieces will be distributed to the individuals and groups that have supported the project. The small, individual pieces are not being gifted to supporters. Rather, the idea is to ask supporters to hold and act as curators of the pieces. At future date(s), at least 10 years later, an attempt will be made to have some of the pieces temporarily returned for further installations. I see the components as a kind of time capsule.
Posted by Tofu at 8:42 PM 1 comment: