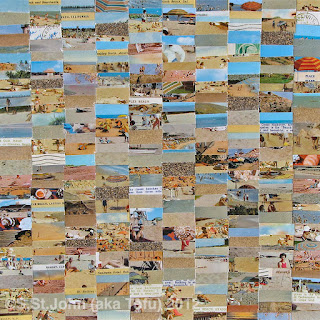 I still keep coming up with ideas I wish I had thought of for the 2011 Project.  This is one of those examples.  I did use some sandpaper in one of the pieces, but I hadn’t thought of encrusting the edges of the canvas in sand as I did with this piece for my upcoming installation.

I added the sand and some sandpaper because I knew that Beach Day needed more than vintage postcards of beach scenes.  The cards have beach scenes from Florida to California with a heavy dose of Cape Cod including Kalmus Beach.  Kalmus is a beach I grew up near in Hyannis, named for Herbert Kalmus who donated the land.  He was also the inventor of Technicolor.  While a motion picture film process, where would the sky in old postcards be without the influence of Technicolor?  Beach Day itself refers to a certain type of summer day, when the weather is just right, and it’s a perfect time to go to the beach.  If you live near a beach, you know….

Prints of this piece are available from Society 6. 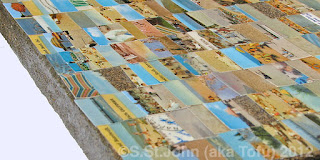