At Home Near the Beach

These 2011 Project pieces have found a new home near the beach.  Lined up on the mantel with Maneki-neko or Japanese Good Luck Cat it looks like they have the power to invoke all sorts of good energy.
Posted by Tofu at 1:24 PM No comments: 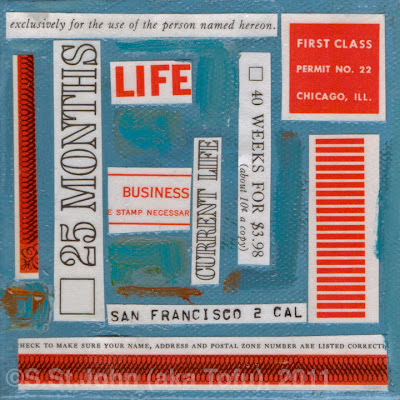 During 2011 as I was creating a piece for the 2011 Project every day, I kept adding them to the wall.  Some have been shown during this time, but basically I’ve been looking at them all for the past two years.  But, I haven’t given much thought to many of the individual pieces and the stories I was writing about them every day on the project blog.  This past weekend I was preparing the pieces for distribution by adding an individual label to the back of each one.  As I was going through the pieces from the first months of 2011, it became an unexpected trip back in time to just two years ago.

Just looking at the pieces was like reading a journal – a journal I do not keep.  It took me back to events as the project was getting started.  The time when I had just nine completed and could begin to see what it might look like.  And then when themes started to emerge.  The revolutions brewing in Egypt, North Africa and the Middle East which are still playing out.  There was the horror of massive earthquake in Japan.  The memories of the first time I took my nephew to the desert.  And, there was the beginning of going through my archives of collage fodder and creating the piece shown above that mentions a 25-month subscription.  Here we are 25 months on, imagine what it will be like to look back 25 years later….
Posted by Tofu at 11:14 AM No comments:

The last day together for a long time.... 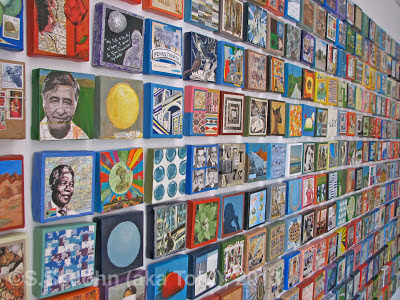 This photo was taken this morning.  Today is the last day the 365 pieces from the 2011 Project will all be together for a long time.  They are ready to be distributed and tomorrow they start going to the post office.
Posted by Tofu at 1:21 PM No comments: 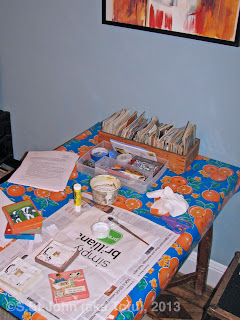 The last (and tedious) step before the pieces for the 2011 Project can be distributed.  Each one needs an individual label.  I can’t trust self-stick labels to stay on, so each one is glued by hand.
Posted by Tofu at 9:26 PM No comments: