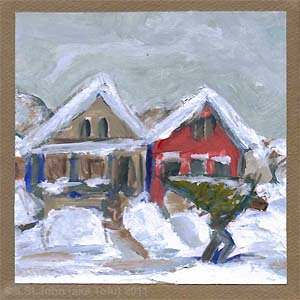 Holidays tend to bring up a lot of memories and stories of celebrations in previous years. They bring up holidays past, the good ones and alas, the bad ones. One of my favorite Christmas stories was one my great grandmother used to tell.

It happened over one hundred years ago when she was a girl. She lived all her life in Buffalo, a city legendary for huge amounts of lake-effect snow. One particular December there was a massive snowstorm big enough to even close Buffalo down. So much snow that roads became impassable and no one could easily get in or out of the city. The storm hit about a week before Christmas. In Buffalo they are used to snow, but this time it was so bad that farmer’s could not make into the city. It meant that there were virtually no Christmas Trees to be found anywhere in the city. Just before Christmas, late one day, my great great grandfather saw a farmer coming in to town hauling a load of Christmas Trees by horse drawn sleigh. Of course he offered to buy one, but the farmer was frozen and not ready to sell. The farmer asked that grandma’s father just watch over the sleigh and the trees while he went and got warmed up and had something to eat. When the farmer returned a little while later, he gave my great great grandfather a tree for free. On the way home many men came up to him offering to buy the tree for huge sums of money. But he refused, and my great grandmother and her sisters and brothers were one of the only families in Buffalo with a Christmas Tree that year.