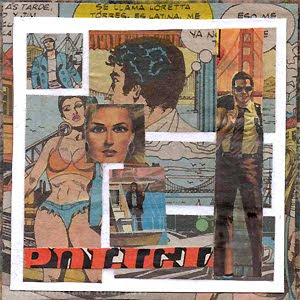 When you live in a place that is depicted in movies, TV shows and books your reaction can range from annoying to amusing. It’s a case-by-case basis. When you live in San Francisco, you get used to seeing all sorts of versions of your City in media. It’s just wrong when locations in cities like Montreal, Vancouver and Los Angeles get substituted for San Francisco. Then again, Hollywood has taken to using the Tenderloin as a substitute for New York in the 1970’s. Movies might make you think I ride all over town on cable cars, but I have not been on one in over 10 years. Even though Alamo Square must appear in every San Francisco movie, I can assure you, that not everyone in San Francisco goes up to that park for a heartfelt chat with a row of Victorians and the downtown skyline in the background.

San Francisco gets portrayed so often, you learn to ignore most of it. But sometimes, you see the craziest stuff. Yesterday, just three blocks from iconic Alamo Square, I found a stack of Mexican comic books. They were stamped “discarded” by a library in Redondo Beach back in 1991. 20 years later they were in a pile on Page Street. El Libro Policiaco depicts an exciting adventure with the “Golden Gate Police Division.” I’ll ignore every bit of Spanish I ever learned and just say they show a San Francisco where everyone drives K Cars and trannies with amazing hip implants are dealing drugs. Mexican comics can be so bizarre. Then again, look at the way Hollywood has depicted Mexico and Mexicans.

Now, I just have to ignore the commercials on TV, apparently a band of gorillas are going to beat up everyone on the Golden Gate Bridge later this week.