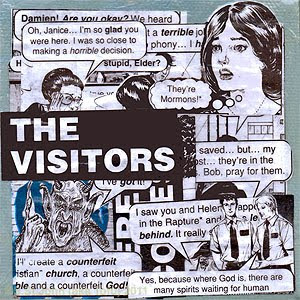 Every time you sit down on BART you can’t think about it. You don’t want to know what lurks in those upholstered seats. It would be best not to read the New York Times article about BART seats and bacteria (I told you not read it). Sometimes when you sit down on BART, you know that a crazy person was there before you. These are the times you find a little comic book left for you on the seat from Chick Publications.

Chick Publications are the car crashes of religious fundamentalism. You can’t help but look. They are truly vile. They are perfect examples of the sort of hate and bigotry that zealots do so well. And as awful as they are, just like McDonalds and Jerry Springer, I secretly like them. They are so gross and yet hilarious. It’s tricky to parody Chick, as they parody themselves. That said, in the 1990’s the San Francisco comedian and performer David Hawkins created a play based on Chick Publications. The play remains one of the all time best underground theatre pieces ever done in the City.

You never know where you’ll find one, so keep your eyes out. The funny thing is I never see Chick Publications left on MUNI. There is no lack of crazies on MUNI, I wonder if the folks at Chick have ceded the turf to Mormon Missionaries.