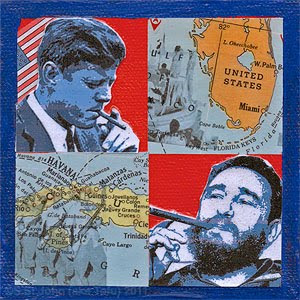 The feud has been going on for too long. Back on April 17 in 1961 the fight really escalated. Today is the 50th Anniversary of the Bay of Pigs Invasion. Simply put, America needs to end this feud with its neighbor.

Not to defend Fidel Castro, but the U.S. Government has been cozy with countless dictators. And on the ruthless dictator scale, many of “our friends” make Castro look like a cigar smoking, boy scout. The Shah, Papa Doc and Baby Doc Duvalier, Somoza, Saddam, Noriega, Marcos — it takes little effort to come up with a list of dictators the U.S. Government has supported at one time. America’s embargo and fight with Cuba is a cold war relic that has no place in the 21st Century. If we can make nice with Vietnam, I think we can get along with Cuba.

When neighbors feud it usually goes on for so long that it is hard to remember how these things ever got started. After 50 years, it’s time to stop.