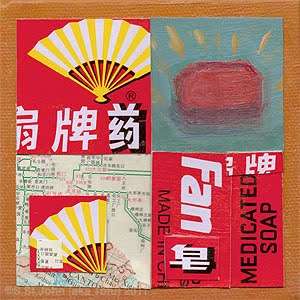 I am a real fan of foreign packaging. When I travel to foreign countries I always head to the supermarket. I can spend hours doing anthropological research just looking at all the “exotic” products and packaging. So much time that I suspect the staff monitoring the CCTV at Marks & Spencer thought I was a shoplifter. In the absence of foreign travel, I live in San Francisco. I have the Mission, Japantown, Chinatown and the Richmond.

One of my rules is, if it is a dollar or less, and you like it, buy it. Last week in the Richmond I came across Fan Medicated Soap. The retro looking packaging and the price of 59¢ had me. The smell is, to be subjective, medicated. It’s pretty awful. And in the spirit of authenticity for the 2011 Project, I used Fan Medicated Soap in the shower this morning. The smell doesn’t linger on the skin. Well, I think the soap removed a layer or two of skin. It’s pretty harsh. But the packaging inspired me for today’s piece.

The bar of soap is actually a rather attractive color. I was thinking that if I wanted to be a new age grifter, I could buy a load of Fan Medicated Soap at 59¢ each. Soak them to remove the embossed logo and then repackage the bars and sell them for $8 each at craft shows. “Homemade” soap indeed. But, in a way, I was too late. A quick search online and I learned the soap is seen as having some spiritual powers. Now, I am not questioning the spiritual powers of the soap and the beliefs of others. But I kept searching and found the bars priced at $5 and even £4.99. You may not live in San Francisco, but shop around because the soap should only cost 59¢.

Now, what do with the bar itself? Do I toss it or save it? It might be the perfect thing for washing my hands after a trip on MUNI.