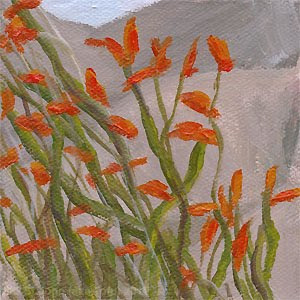 I can still remember the first time I saw an Ocotillo. I was visiting Joshua Tree National Park and making my first foray into the lower, southern section of the park. It is where the national park drops from the Mojave into the Sonoran Desert. That trip was during the first spring in the El Niño year after the drought broke back in the 1990’s. It was the sort of desert bloom that usually only happens every 10-15 years. Driving south I left the Joshua Trees behind and suddenly encountered these tall, spindly cacti.

I had never seen anything like this cactus. They are tall, 10-15 feet high with branches stretching out towards the sky. At the tips of the branches were these flaming red flowers. There is no mistaking it, this is the Ocotillo (Fouquieria splendens). The best word to describe Ocotillo is flamboyant. They are the drag queens of desert flora — tall, spiky, flashy and demanding attention.

Ocotillo grow in the desert from Southern California to Texas and south into Mexico. The best place I have found to see them is Anza Borrego State Park south of Palm Springs. In March and April they are in full bloom. Where they bloom the flowers are often the only vibrant color. The effect is that in a few places Ocotillo are so thick the desert appears to have a red haze hanging over it as you look in the distance.