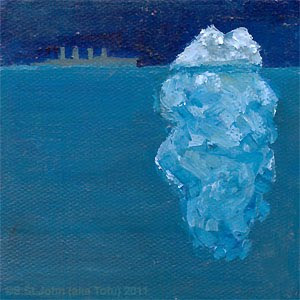 99 years ago tonight, The Iceberg was minding it’s own business. The Iceberg was peacefully drifting through the North Atlantic then the Titanic struck. It was a horrible and tragic disaster where over 1,500 people lost their lives. The world has seen many disasters and many with a much greater loss of life, yet this one seems to mesmerize us. Even without the blockbuster movie, this is one disaster that our history seems to dwell on. It is expected for any culture to focus more on the tragedies that befall them. Horrible things happen in the world all too often, but there is always a bias in the media when it happens to people “like us.”

I believe with the Titanic there is something more going on. There is something about an “unsinkable” ship, a marvel of technology, so simply being sunk by hitting an iceberg. We are both fixated on such history lessons yet still seem to ignore them. Playing the odds and believing blindly in the latest technology is a pattern that repeats itself. The Gulf of Mexico devastated by oil last year and radiation still spreading in Japan. There are plenty of icebergs out there, and we’d be better off if we slowed down made room for them to float by.