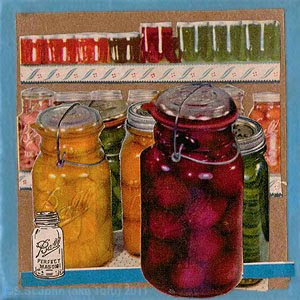 In the pile of things waiting to be cut up for the 2011 Project was a 1941 edition of the Ball Blue Book. It was a home canning cookbook published by the folks at the Ball Brothers Company in Muncie, Indiana. They were the company that originally made mason jars. Back in 1993 they sold off the jar manufacturing division, but the current parent company, Jarden Home Brands, is still making mason jars in Indiana.

The cookbook has tips and recipes to can pretty much can anything you might eat. From Tomato Butter to Head Cheese to a mysterious condiment called Peruvian Sauce. Of course the book has more familiar items from my childhood such as canned peaches, pickles and tomato sauce.

I grew up in a city family with access to inexpensive and good farmers’ markets. Canning was part of the routine from late summer and into the fall. We even lived in a Victorian house with a special room in the cellar to line up all the jars of peaches, bread and butter pickles, dill pickles, pickled beets, jams of all kinds, chili sauce and the most important canned item of all, red pepper relish. It was slow food before anyone had coined the term and we were all pretty much locavores back then. In a Buffalo winter, last summer’s canned beaches are far better than some “fruit” at the supermarket that was shipped in from thousands of miles away. We did not recycle the jars — we re-used them.

Canning is becoming a lost art for many, even in our foodie-obsessed culture. As the economy collapses, it’s a skill we need to get back. Even in our small apartment kitchens.