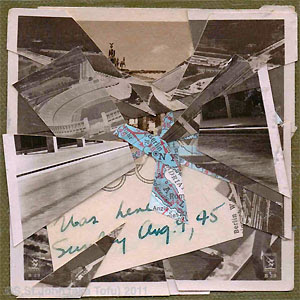 Last month, on August 9th, I received a package. My friend Karen sent me a box that contained some of her late Uncle Bill’s old postcards. The postcards were mostly from Berlin in the 1930’s. There were images of the city before it was destroyed during the war, some creepy images of Hitler and a quite a few images of the Olympic Stadium and other buildings from the 1936 Olympics. Uncle Bill did not pick-up these postcards while on vacation. Uncle Bill was with the 82nd Airborne as part of the occupation. On the back of one postcard of the stadium, in Uncle Bill’s handwriting, was the note, “Was here, Sunday Aug., 9, 45”.

World War II was already over in Europe on the day that Uncle Bill was at the Olympic Stadium. Before the 82nd Airborne occupied Berlin, Uncle Bill had landed at Normandy in a glider. He fought at the Battle of the Bulge and he was with the 82nd Airborne when they liberated the Wöbbelin Concentration Camp. Uncle Bill was awarded both the Bronze Star and the Purple Heart. During World War II, so many people were part of the effort to defeat fascism and so many fought and millions gave their lives for freedom. All of their efforts should be remembered and honored, but still, some of them were extraordinary, they were heroes. Uncle Bill was one of those heroes.

I have chosen this day in particular to honor Uncle Bill. Because today is the day that the repeal of the military’s Don’t Ask, Don’t Tell policy officially takes effect. One’s sexual orientation is irrelevant in their ability to serve their country. It just doesn’t matter. Thousands of gay and lesbian Americans have served their country, and like Uncle Bill, they had to serve in silence. Uncle Bill, like so many of his generation, fought for our freedom. Today, the country he fought for is a more just place where the words liberty and justice for all have moved closer to the truth.