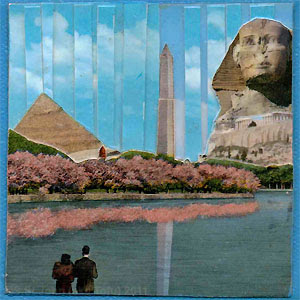 When does it start? Did they look up one day in Ancient Egypt and say, “Hey, the nose fell off the Sphinx, we better do something about that.” When do things start turning to ruins? How do we tell the difference between Visigoths and Canadians? It’s a compelling question about many ancient empires left in ruins. When do you know?

With all that in mind, in case you haven’t heard yet, the Washington Monument took quite the beating in that recent earthquake centered in Virginia. Now, of course, the government will make every effort to repair and restore the Washington Monument. Or, will they? The American rightwing is determined to obstruct the workings of government at any costs. Will next year see the triumph of their campaign of polarization? Will the Red State/Blue State dichotomy become permanent?

They probably will repair the Washington Monument and we’ll all plod along. Or maybe we’ll look east from the California Republic as Sarahnewt Rick Bachmanromney fiddles while their country collapses around them. It might get interesting.