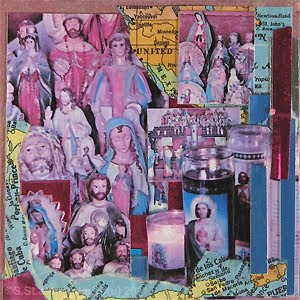 Today is Día de Todos Santos, or in English, All Saints Day. Brujería know the Saints. They know them from Brazil to Columbia, from Mexico to California, from Havana to Nueva York. From Port au Prince to Tucson they know the power of the Saints. (The images in this piece come from Mission San Xavier del Bac near Tucson.) The Saints are the Gods and they may bear alternate names bestowed by Catholicism. Many of them have their corresponding deities in the pantheons of indigenous and African-rooted traditions throughout the New World. For example Erzulie Dantor, the mother goddess of Haiti, is often associated with Poland’s Black Madonna. Haiti’s Papa Legba may appear as St. Peter. The corresponding God is known as Eshu or Exu in the Candomblé religion of Brazil. There he is associated with Saint Anthony de Padua.