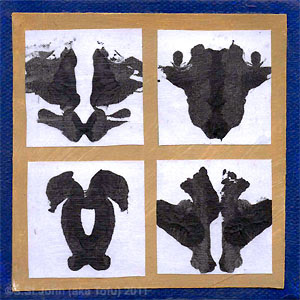 Have a look at today’s piece for the 2011 Project. What you think about it may determine if you’re crazy, or not. Or perhaps it says something about the artist? Hmmm.

Back in Zürich on this day in 1884 Hermann was born. As a teenager he got into Klecksography. It was the thing for kids to do back in the days before video games and the internet. Klecksography was the making of inkblot pictures. Fun! Hermann, as in Dr. Hermann Rorschach, went on to make it his life’s work.

I lived Switzerland for a year in the 1980’s. Living in the small city of St. Gallen in a neighborhood called St. Fiden (St. Fido!). I lived a block off the main street through the neighborhood. It was called Rorschacher Strasse (Rorschach Street). I did so much in Rorschacher Strasse, everything from the grocery store, the post office, lottery tickets (once I won SFr 100), haircuts to my Swiss Bank (I used to love saying I had a Swiss Bank Account).

The name Rorschacher Strasse could lead to all sorts of wacky symmetrical public art. They really could have had fun with it. But this, after all, was ever so serious Switzerland. And the street is actually named for the road that leads to Rorschach, a town on the Bodensee (Lake Constance).

As I signed and dated the back of today’s piece I also noticed the date is coincidentally and perfectly symmetrical – 11-8-11.