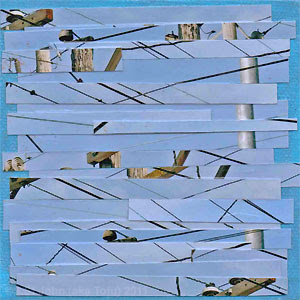 There are certain images that come to mind when many people think San Francisco. Things like cable cars, Victorians and the Golden Gate Bridge. While valid, those are the images made for Hollywood and tourist postcards.

For me, one image that really says San Francisco is our nest of wires. The wires that are in view whenever you look up above the street. The jumble of wires sprouting out of poles wherever you look out a window. Even in posh neighborhoods, the rich look out of their windows into poles that are a jumble of wires. The same wires vex camera-toting tourists trying to photograph our pretty houses. The poles lean like drunks adding to the chaotic effect of telephone, electric, cable wires. To the mess, add the wires for electric buses and streetcars. Ironically, the ancient cable cars have their cables discreetly beneath the streets.

The wire mess may not be pretty, but it always reminds me that I am home.