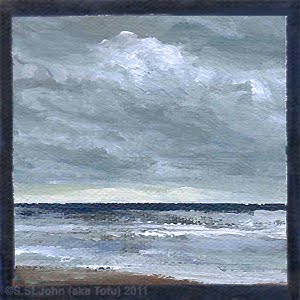 Last weekend I was on Cape Cod when the first storm of the winter hit. And it was a real winter storm with record-breaking snow (except on the coast). It was early for winter and served as a reminder of why I live in California. The morning after, we stopped at Sandy Neck Beach on Cape Cod Bay. I snapped some photos as the remainder of the storm blew out to sea. Windy, cold and incredibly beautiful, the beach completely swallowed by the surf. A few minutes outside and I had sand in my teeth.

An hour later we were in Stop & Shop. The day before Halloween but everyone was already wearing a mask. The mask was that miserable face they get in New England and will now be wearing for the next six months. They’ll tell you how they love winter as a way of trying to get through it. But their faces tell the truth. The next day I was on a plane home to California with a window sear to watch the snow below.