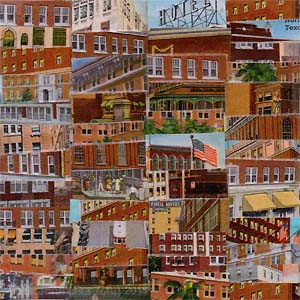 You don’t notice it right away, but there is something missing in San Francisco — bricks. You have to look hard to find brick buildings. There is a reason: brick buildings tend to fall over easily in an earthquake. This morning I walked by the site of a streetcar barn on Oak Street. I have seen the photos of the pile of lumber and bricks that was left in the aftermath of the 1906 Earthquake. Some of the city was rebuilt in bricks and more of those buildings fell in 1989. I used to work n Jackson Square where now the brick buildings are braced up with steel chevrons to give a false sense of security (the walls may still fall, the building just won’t pancake). Every other neighborhood has a few brick buildings that are closed, boarded up and waiting for the next one to finish them off. There is something picturesque about a brick filled urban landscape, but there is good reason we don’t have many in San Francisco.