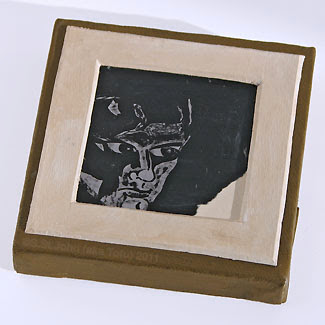 Today’s piece for the 2011 Project is about art you find hidden behind art when you dismantle an old picture frame. It also is an expansion of an idea for a temporal art piece that I did at the end of 2010.

Last year and again recently I was on Cape Cod helping my mom get ready for her move to California. We have been sorting through decades of stuff accumulated over 50 years. Back in the 1960’s and 1970’s my dad would comb the thrift and junk stores for treasures. Our Victorian house back in Buffalo had walls filled with prints and etchings from the late 1800’s through the 1930’s. Many were the sorts of things that turned up at the Goodwill and estate sales a few generations later. Some are better than others. In some cases, the antique frames are the parts most worth saving. Going through them has meant taking apart old picture frames. About half the time there is something else hidden behind the art in the frame. And in many cases, the frames have not been opened up for nearly 100 years. Most of the pieces my dad bought went straight up on our walls. We had no idea what was hidden behind them.

In the summer of 2010 I found one of the more intriguing pieces of hidden art. I was taking apart a frame with landscape by the Brazilian artist Reynaldo Manzke. The big surprise was the portrait on paper hiding behind the painting. An unsigned mystery that seems influenced by German Expressionism. More about the discovery is also on my art blog. That mystery painting was reproduced for today’s piece for the 2011 Project.

I have also added an element to today’s piece that allows anyone to participate in the project and a new temporal piece of art.

As I mentioned above, this is an expansion on an idea from the end of 2010. I have always been intrigued by the ephemera you find in between the pages of old books. Last December I created a series of 62 small pieces of artwork that were distributed with the intention of having them hidden away and forgotten in books owned by the 62 different recipients. More about the piece can be seen on my art blog.

I have created a print based on today’s piece. Follow the link to the project website and there you’ll find a PDF file that can be downloaded and printed. What I would like you to do with the print is to place behind something else in a frame. Close up the frame and forget about it. Think of it as a time capsule to be found years later that will bring someone back to the 2011 Project and the art created today and also to this mysterious, anonymous painting created nearly 100 years earlier.