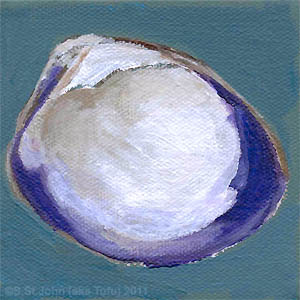 It’s time to start getting ready for tomorrow’s big dinner. It also is time for the media to inevitably recycle the same, speculative stories about the first Thanksgiving and what was served at that meal. I think we can all agree that a cylinder of cranberry sauce didn’t shoop out of the can onto the plate back in 1620. But after that, the menu starts becoming debatable. It’s likely that the meal included quahogs, the hardshell clams common to the shores of southern New England. The inside of the clamshells are the source of one of the most beautiful and intense shades of purple found in nature. It’s that purple that was so highly valued. Quahog shells were cut and crafted into wampum beads by the Wampanoag and other Native Americans who made a home in a place that those other folks at Thanksgiving told them was called New England.