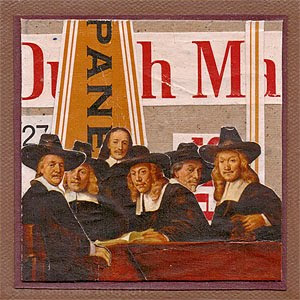 Rembrandt would have been 405 years old today. For the 2011 Project I decided to create an homage to Rembrandt. I couldn’t find anything appropriate in my collage horde until I remembered the old cigar box. I found the cigar box a few years ago in my mother’s attic. It contained all sorts of postage stamps and other saved items that I collected when I was about 12. I remember my great grandmother gave me the box but I have no idea what she kept in it. The box must have belonged to my great grandfather. And to give you and idea of the box’s age, it was from a time when the cigars were priced at 2 for 27¢.

How odd that 300 years later, in may circles, Rembrandt would be best known as the artist who painted the guys on the cigar box. The Dutch Masters brand is celebrating its 100th Anniversary this year. I doubt they’ll be around in another 100 years. Cigar smoking is one of those habits on a steady decline. In 2111 the public might have a different image in mind when it comes to Rembrandt.

Imagine further into the future. What artists will be best associated with a product in 2211 or 2311? I have no doubt that Warhol will be a brand of soup. Will Wayne Thiebaud be reduced to an image on a cake mix? Will the A.K.C. have a registered breed called the Jeff Koons (a very yappy little terrier I suspect)? Will Hoppers be the best little pills to calm you down? I can’t even imagine what product my art will be associated with.