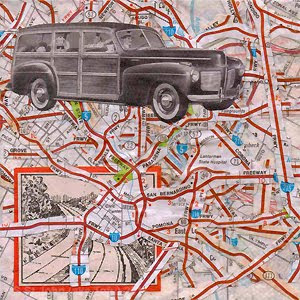 Back on this day in 1940 one of the most important changes in American history happened. The Arroyo Seco Parkway opened up. It’s better known as the Pasadena Freeway or The 110. The reason the Pasadena Freeway is significant is it was the first freeway in the United States. So much of what makes Los Angeles what it is and California and pretty much the rest of the United States is essentially the freeway. For better or worse.

Even though I have not owned a car since college, I have what could called be a love-hate relationship with freeways. They enable some sweet nectarines to get into my farmer’s market nice and quick and if I do want to go to L.A. I can get there in just over six hours. But freeways have disconnected us from one another. We’ve sprawled all our communities over the land and we’ve nearly ended the railways. Oh, to take a real high speed train to be in L.A. in about 3 hours or get back on an interurban street car and spend the day in Santa Cruz.

I wonder what the state of the freeway will be when we come up on the 100th anniversary. Will the price of gas make freeway travel a rare luxury by 2040? Will there be more freeways or less?

San Francisco is the first American city to stop a planned freeway. My block, along with 10 others was to be demolished for a freeway that was planned to run through the Panhandle and then into Golden Gate Park. It’s hard to imagine that freeway. But it is even difficult to imagine the freeways we’ve already torn down. When I walk along the Embarcadero or through Hayes Valley, I have a hard time picturing the grim, elevated freeways that used to be there. I remember them but I could never imagine putting them back.