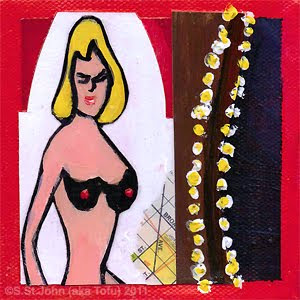 I’ll never forget the first time I saw Carol Doda’s flashing red nipples. They were flashing red on the Condor’s sign at the corner of Columbus and Broadway. I was 11 and we were in San Francisco on a family vacation. I found the experience shocking. Dare I say titillating? From Carol Doda’s red flashing nipples to a local character named Jesus Christ Satan running through the Broadway Tunnel. I saw glimpses of this strange and freaky place that was destined to become my home. I Saturn Returned and moved to San Francisco. It was no coincidence that I ended up with a job just a few blocks from the Carol Doda sign. Some of us are truly drawn to the City even before we realize it.

Sadly, the Condor took down the Carol Doda sign some years back. For all San Francisco’s fights over historic preservation, we often miss the important things. In many ways the City is tamer today than it was back then. But there still is more than glimmer of weirdness here in San Francisco.

Years later, July 2011 — I found myself on the 38 Geary heading into the TenderNob for dinner before an evening of weird and amusing theatre. It’s tourist season and you often see the more adventurous visitors on MUNI. There was a large and most Middle American family sitting near me. They looked right off the boat from some place like Iowa or Utah. Actually, I was impressed they were not driving around in sealed in a van.

One could read a lot about, or at least into, the family dynamic. I started looking and kept counting, seven, yes seven kids! There was a kid sitting across from me, about 14 (we’ll get back to him). Next to him sat a brother of about 15. He was a big boy, a very big mama’s boy heading for a case of adult onset diabetes. He was practically sitting on his mother’s lap. The oldest son was Mr. High School Jock doing his darndest to pretend he wasn’t with the rest of the family. Dad sat next to a rambunctious brother of about 10 who was a younger version of Mr. Jock. Then there were two younger, rowdy twin boys, and finally the little princess. The only girl was the youngest of seven kids. You really do not see families that big very often, you have to notice.

The kid who was about 14 and sat across from me kept staring. I suppose as one of the middle kids with no particular archetype to play, he was the outsider. It looked like he was without any role or purpose in the family dynamic. And the kid kept looking. Looking at me and everyone else on the bus. I said nothing, but I was thinking, I know that look. This reincarnated child of Atlantis is beginning to recognize his home. He may not return to our City for more than a few years but I know — he’ll be back. I like to think I was this kid’s Carol Doda. Come home child, we always have room for one more freak in San Francisco.