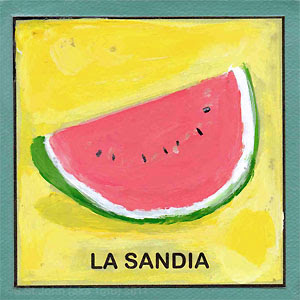 Sandia was one of the first words I learned in Spanish. It’s easy to remember and one of my favorite flavors of aqua fresca. I even make my own lime-watermelon aqua fresca at home. I also learned the word sandia from lotería cards. As it is a watermelon (or sandia) time of year and I knew the 2011 Project needed a summery piece dedicated to the most summery of fruits.

Recently I found a museum catalog from a show about lotería cards in Sioux City Art Center in 2005. I wish I had seen that show, but Iowa is not the type of place I get to. I wait for Leslie Hall to tour. The catalog is real find and I have now learned more than I imagined about lotería cards. Among other things, the image of the watermelon, la sandia, is important because of the colors red, white and green, the colors of the Mexican flag. The ubiquitous sandia in Mexican art is more than just about an appreciation of the fruit.

When I see images of watermelon, my reaction has always been summer. For Mexicans and Mexican-Americans there is an extra meaning in a slice of fruit that represents the national colors. America just doesn’t have a good red, white and blue fruit. But then again, the American identity is defined by being a mix of different people from many diverse places. We might be best represented by a salad with colorful fruit from all over the world.