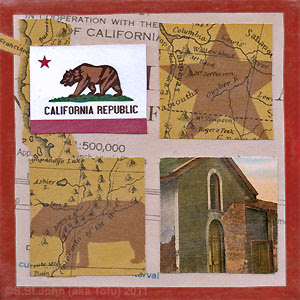 165 years ago today, in 1846, Sonoma experienced the Bear Flag Revolt and the declaration of the California Republic. The short-lived republic lasted less than a month until California was “annexed” by the United States during its war with Mexico. Mexican historians would likely tell a different version of this bit of history. Although all parties involved tend to ignore the native Californians who had been living here for thousands of years before any Europeans arrived.

The lasting legacy of the Bear Flag Revolt is our state flag. Our flag is a modern version of the flag designed in 1846 by William Todd. It featured the red star from a lone star flag from an earlier rebellion in 1936. The 1846 flag had the addition of a grizzly bear, a red bar and the words California Republic. Hypothetically, if we were to have our own country, California has a ready-made flag bearing the name California Republic. It’s been our official flag since 1911.

My favorite part of the Bear Flag’s history might be this little bit I found on wikipedia:

In 1953, the design and specifications for the state flag were standardized in a bill signed by Governor Earl Warren. The Californian state flag is often called the "Bear Flag" and in fact, the present statute adopting the flag, Gov. Code 420, states: "The Bear Flag is the State Flag of California."