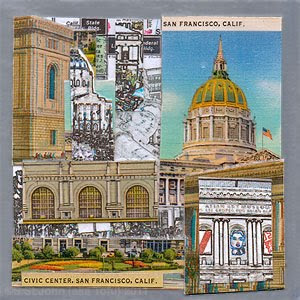 After all these years, I still go back to the same image every time I walk through Civic Center Plaza. Under the pollarded trees I always am ready for Donald Sutherland to pop out with his scary face from the end of the movie Invasion of the Body Snatchers. I have friends who really object to those alien-looking trees. Personally I can’t imagine Civic Center without them. I like them.

The real jewel of Civic Center is San Francisco’s City Hall. I love having an excuse to go inside. The best word to describe it is grand. When you step under the dome you know you are in one of the greatest civic buildings in the West. I know some Europeans can be a tad dismissive, I’ve heard Brits make snide remarks like, “When you have St. Paul’s…” Uh yeah, but for the Western U.S. it’s pretty darn good. And unlike the grand edifices of London, we actually are happy to have you walk around and have a look. No matter which of the grand buildings you visit in London, you’ll always encounter some pompous old curmudgeon who confuses being a docent with a being a member of the WWII Home Guard.

Aside from City Hall itself, Civic Center is a place that it seems many San Franciscans really dislike. They still complain about the Old Main Library being converted to the Asian Art Museum (I like it actually). And yes, the new(er) Main Library is not quite perfect, but I like it as well. I appreciate how the contemporary façade compliments the other Beaux-Arts architecture around the plaza. Visually it is a good urban space. The plaza also acts as the perfect stage set for the mob. Oh the mobs and the memories….

Civic Center might also be a bit haunted. It sits on top of the old City Cemetery. That is the same cemetery that was relocated to what is now Lincoln Park. When the golf course and Legion of Honor were constructed, the cemetery was once again relocated down the Peninsula. The headstones were moved and most of the human remains were moved. But in both cases, quite a few graves were left behind.

Today is Wednesday — it is usually my day to visit Civic Center. I always check the steps of the library book sale and find some good collage fodder for $1. The next stop is the farmer’s market. Nectarines are in season and they are about to head into the oven and meet some brown sugar for dessert tonight.