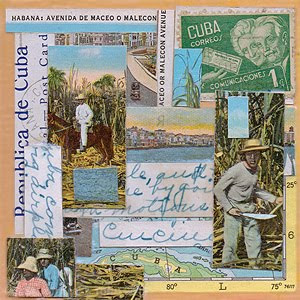 Back in 1941 Carmen Miranda helped glamorize the ultimate getaway – the weekend in Havana. As soon as the war was over, travel was easier and trips to Cuba came back into style. Maude and Jack got down there for a little trip in January 1946 to see the Caribbean Shore where the view and music is tropical. I imagine a trip full of fruity cocktails and dancing the rumba. I have surmised all this from a postcard they mailed to their friend Patty Ann Burdge on Mapleleaf Avenue in Cincinnati. The card read as follows:
Dear Patty Ann,
Jack and I are in Cuba, come over on a big airplane. Everyone is so nice to us and I can’t understand a word they say, so they smile, and try to tell me by going through the motions.
Lots of Love,
Maude + Jack
Before cutting up these Cuban postcards I preserved them in a scan (see below). Patty Ann received a card with a cosmopolitan image of Havana. I had another card from the same era that depicted the cutting of sugar cane. Perhaps I am reading too much into the image, but there is something foretelling about the worker armed with a machete in the foreground while the plantation boss wears a pristine white suite and sits astride his horse. I could not resist juxtaposing both images, but then again, historical hindsight is always 20/20.