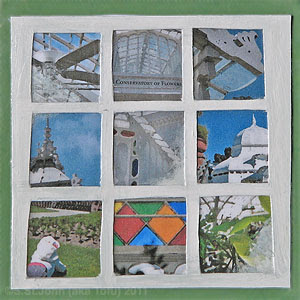 This started back when I was about 10. San Francisco’s Conservatory was designed by the firm Lord & Burnham & Co. They also designed a similar structure for a Frederick Law Olmsted park in Buffalo. My grandfather worked at the one in Buffalo. I always remember those Sunday afternoon/early evening visits after the building was closed to the public. To this day, I kind of feel I should be entitled the same privilege here in San Francisco. Don’t they know my grandfather used to work in one of these?

I have read various histories about the Conservatory and there is some debate as to which facts are accurate. I will stick to the story I like best. In 1878 the building was ordered by local millionaire James Lick for his garden. Built to order in component parts, it was shipped from Great Britain. While the pieces were being shipped Mr. Lick expired. His widow had no interest in a white elephant of glass and wood. She generously donated it to the City for the new Golden Gate Park. The Conservatory is well built. It survived earthquakes in 1906 and 1989. Legend has it that the only damage in 1906 was the loss of three panes of glass. Afterwards the plants were brought outside and the building served as a makeshift hospital.

There may be some debate as to the older history of the Conservatory. I was here in December 1995 and remember what happened then. We had a very intense, windy storm blow in. Hundreds of big trees were toppled in Golden Gate Park and the Conservatory suffered some serious damage. The storm was blamed, but the biggest culprit was the City and a culture of neglect and corruption when it came to maintenance. In the aftermath of the storm local politicians including the mayor held the Conservatory hostage. They threatened to tear the Conservatory down. Fortunately the building was saved and restored after it was rolled into one of our massive bond issues. The politicians behaved as ugly as they always do, but luckily we got to keep this gem.

I walk around the Conservatory a few times every week, but only go inside a couple of times a year. I prefer those visits for the dampest and coldest winter days when I need a dose of the tropics.