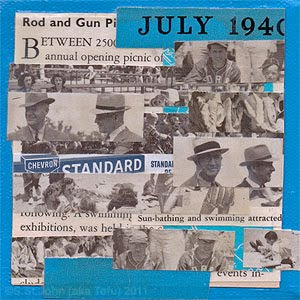 The company picnic is one of those vanishing traditions. It goes back to the days when employers still took a paternal attitude towards employees and kept many of them until retirement. I have mostly worked for smaller companies, but even had I worked for large employers, I still doubt I ever would have had the opportunity to go to a company picnic.

In my collection of collage fodder I have a Standard Oil employee magazine from 1940. There is a whole spread on the two, annual employee picnics they held. One picnic was down at Tejon Ranch and one for the Bay Area employees at the Rod and Gun club at the refinery in Point Richmond. The Rod and Gun Club was a large recreation area that included swimming pools and gyms for the workers at Standard Oil’s refinery. The images in the 1940 magazine have a bit of time capsule quality to them. The 1940 picnic was the last one before the U.S. entered Word War II. Very quickly everything changed in Richmond. A company town became a booming city almost overnight as workers poured into the Bay Area for the war effort.