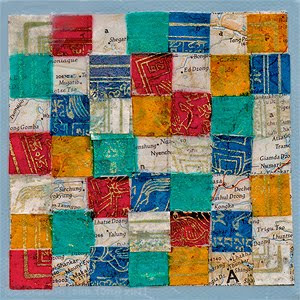 While I am neither Tibetan nor a Buddhist there are things I find attractive about Tibetan prayer flags on many levels. Of course I go for pretty much anything colorful. And beyond the color, I like the sense that the flags are like temporary art installations. The prayers flags are admirable just from an aesthetic point of view. But it gets better — traditionally the flags are printed with prayers and the belief that the wind carries the positive message printed on the flags out into the world.

There are also traditions that respect the flags as sacred objects — one might question cutting them up for a work of art. But the flags I used are those fundraising ones that virtually every San Franciscan gets in a letter a few times a year. Those five little flags are as ubiquitous as a Bed, Bath & Beyond coupon. In themselves, they do not feel sacred. And even if some perceive these flags as sacred, wouldn’t it be appropriate to use them in art to spread a positive message? The mantra for the day is The prayers of all good people are good.