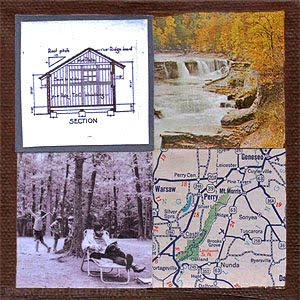 When I was a kid, my family usually rented a cabin at New York’s Letchworth State Park for a week in the summer. Usually we stayed in Cabin #17 — 17 has always been one of my lucky numbers. The cabins were built during the Great Depression. They were a Civilian Conservation Corps (CCC) project. The CCC was the New Deal program that put thousands of young people to work restoring and building infrastructure in state and national parks. My grandfather actually was part of the team that built the cabins at Letchworth. How we need that New Deal again for the 21st Century.

Letchworth is known as The Grand Canyon of the East. It’s a 17-mile long park with waterfalls and a gorge running through the park as the Genessee River makes its way north to Lake Ontario. When I was little it all seemed quite big. After living in the West with a few road trips under my belt, I made a return to Letchworth one day as an adult. It all seemed quite small when you’ve become used to national parks the size of New England states. That always tends to happen when you return to places from your childhood. The park seems small to me now, but the memories are still big.