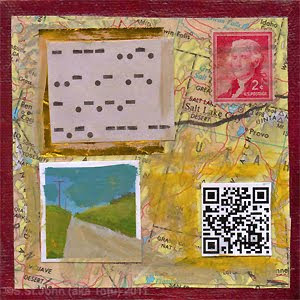 On this day 150 years ago Carson City, Nevada was connected to Omaha, Nebraska. With that stretch of telegraph wires, the first transcontinental telegraph line was complete. Virtually “instant” communication between the East and West Coasts became possible. Literally two days later, the Pony Express was out of business. 150 years later we’ve taken instant communications and technological advances for granted. As soon as I click the mouse today’s piece for the 2011 Project is available to anyone in the world with internet access. But it’s not just about art, this year we’ve seen what access to communications can do. Dictatorships topple and images of dead dictators go around the world in seconds.