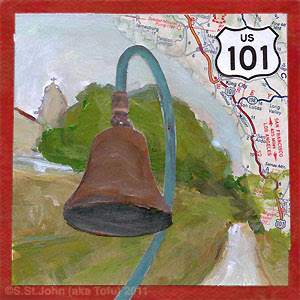 Yesterday afternoon I was standing in the middle of El Camino Real. No, I was not on a busy road of big box stores and strip malls on the Peninsula, nor was I standing in the middle of the 101 Freeway. I was in San Juan Bautista State Historic Park. There, below the plaza, next to the old mission is a small stretch of The Royal Road. You get a good connection to history when you stand on a dusty trail that served as a road over 200 years ago. Back then the road itself was more a series of interconnected trails linking Spanish missions and presidios. After Mexican independence the name El Camino Real fell into disuse. No Spanish king would be traveling up through Alta California any time soon. It wasn’t until the 20th Century, when California was redefining itself and mythologizing its history that the moniker El Camino Real came back into use along with the reproduction bells that line the route.

History real and re-imagined, I am glad that little bit of the old road is still there. San Juan Bautista became a quiet town bypassed by railroads and freeways. The good news is that it is now the only mission town that really feels old.