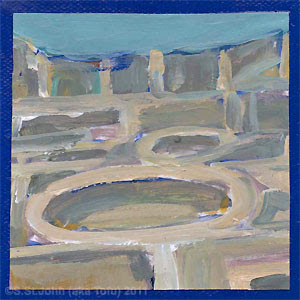 A friend was posting his Chaco Canyon photos online recently. It was a reminder that I am due for another trip to the Holy Land (the place most people call New Mexico). Chaco Canyon is one of the most sacred sites in that part of the world. I first learned about the place from a documentary that still gets a lot of play on PBS. As soon as I saw the film, I wanted to go. Now I have been a few times. Simply put, it’s America’s Stonehenge — but that is a simple explanation. I’ve been to both places and Chaco Canyon is much more sophisticated. The astronomical observatory that was constructed at Chaco one thousand years ago is the most complex, pre-computer era observatory built — that we know of.

Chaco Canyon is a great technological accomplishment but it also a sacred space. For some visitors the experience is a straightforward set of Native American ruins. For other visitors, there is clearly more going on there. And you really have to want to go. It’s near Four Corners, far from most everything and includes the challenge of a long drive in on a dirt road. It’s that remoteness that makes the place accessible once you arrive. The crowds are sparse and you’re really allowed to explore. Each visit has been a new experience for me. And, when you’re tall like me and have to crawl through the narrow stone doorways, something might happen — you may even suddenly understand those reoccurring dreams you’ve been having for years.