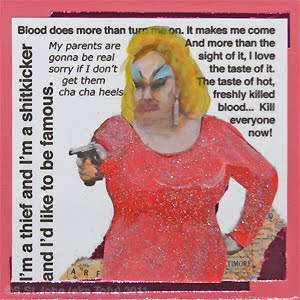 Today would have been the 66th birthday of one America’s greatest actor’s, Baltimore’s Glenn Milstead, who most of us know as Divine.

I own and love most of Divine’s films, the ones by John Waters as well as Paul Bartel’s Lust in the Dust. I still have my original, the good one with photos, Odorama card from the original release of Polyester. I took friends visiting from Sweden to see that one and they still haven’t recovered. The day Hairspray opened in 1988, I left a post-it on my computer saying I was “running errands” and with a few other delinquent co-workers we took in a lunch and a matinee premier. It was all of a week later that we were shocked by Divine’s sudden death.

I love corrupting young minds with Divine. Don’t worry — I wouldn’t start with Pink Flamingoes. When my cousins were just 12 and 14 they came down from Washington. They are from a small town on the Columbia River just far enough from Portland to be close to Mortville. Ten minutes into Hairspray I had to pause it and explain the historical context. My cousins knew virtually nothing of the history of the civil rights movement. That says something about the quality of education in Clark County, Washington. Soon after that my 12 year old cousin Thad was suspended from school due to his “disruptive” hair. It was a bit of life imitating art up there (today he’s a former juvenile delinquent and punk rock star now – Divine would be proud). We finished off the weekend with Serial Mom and Pecker. Call me a bad influence. I should also mentioned that Divine was such a brilliant actor that the boys had no idea he was actually a man. I stopped the movie halfway through and told them.

One of the things that strikes me about the passing of time, is the way one can end up doing something in the present that would have been hard to imagine years before. 18 years after Divine’s passing I found myself at 7940 Hollywood Boulevard. A work colleague casually mentioned that he lived in Divine’s old apartment. As soon as I got down to Los Angeles I headed straight there.

The first thing that made me laugh and grab the camera was the sign in the courtyard reading Please Clean Up after Your Pet. The building was one of those groovy two-story, courtyard apartment buildings so typical of Los Angeles. It was about to be torn down to make way for something ugly and bigger. I knew I wanted something old from the apartment and I decided to take all the light switch plates. I had a stack of new ones to swap out – my work colleague was concerned about getting his deposit back – even though they were about to tear down the apartment building. He was probably right.

My intent is to use the switch plates for a Divine Light art project — I still have them and will one day get to that. On that morning, I got out my screwdriver and went to work taking the old switch plates and replacing them with new ones. It was going quickly until I got to the kitchen. I was by myself in the kitchen, and try as I might, the screws wouldn’t come loose in that last one. Finally I turned around and said aloud, “Okay Divine, you’ve looked at my ass long enough, let me get this done.” That was all it took and the screw came right out. And seriously, all the laughter Divine has brought me, I didn’t mind his ghost checking out my ass one bit. 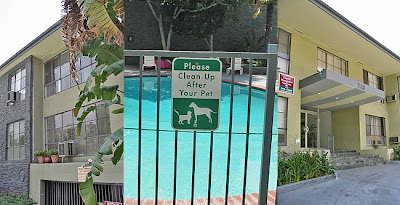