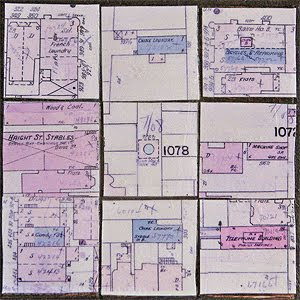 Years ago I discovered the Sanborn Maps. They are detailed maps prepared for fire insurance purposes. They had every building in the City on them and were bound in large, cumbersome books. I’ve spent hours in the history room at the main library perusing the edition of maps from the 1880’s. Now, I can do it right from home. The 1905 edition is available online. I love cutting up old maps for my artwork. But I do set some limits for myself. I wouldn’t cut up a Sanborn map — these are digital images that have been reproduced.

With Halloween approaching the maps could come in handy if you were looking to meet some of the ghosts in the neighborhood. They reveal buildings that were in the Lower Haight in 1905. Some structures are still there and some have been replaced. The maps sometimes have details of business located in different buildings.

I have been around long enough to remember the abandoned taxi garage on Haight between Pierce and Steiner. Lofts are on that location now. But the space had a long time in the transportation business — it used to be the Haight Street Stables. Do the loft dwellers occasionally hear the heavy breathing of a draft horse or the distinct sound of its hooves?

A block north of the stables, on Page Street, there is a church in a building that used to be home to a dance academy (I’ve seen some old photos). Before that was built the street was empty except for a Chinese Laundry. I imagine the church ladies startled by a gentle tap on the shoulder and a whisper of Cantonese in their ear.

There were Chinese Laundries all over the neighborhood. One was down the street from me on Oak. And further down the block was a French Laundry that still is a Laundromat today (and one with a very sweet ghost who was the proprietress for years). Across the street at Haight and Scott is a dry cleaners that used to be a bakery (I wish the bakery would come back). The Tae Kwon Do Academy was a bicycle repair shop.

Many people mistake the old telegraph office on Page Street for a bank. We almost lost that building in the dot.com boom. The maps mark it as a Telephone Building in 1905. In the middle of that block was a windmill.

My building was built in 1927. The lot was empty before then, an outcropping of serpentine had to blasted away to fit the building into the lot. There is a church parking lot in the middle of the block where zipcars rest. One hundred years ago a “machine shop” with a gas engine was at the back of the lot. Nowadays, maybe only the ghosts remember what was made in the shop.