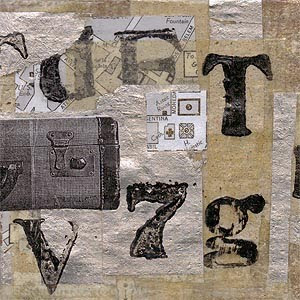 I own a Fulton Sign & Price Markers set. It’s this set of old rubber stamps that would have been used by a 19th Century businesses to make signs. It includes all the letters, numbers, dollar, pound and cent signs as well as special stamps with terms like “per dozen” and “per pound.” My dad picked this up in some old junk store or the Goodwill in Buffalo about 40 years back. As a kid I used to love playing with it. It followed us to New England and got lost in the attic until I rediscovered it in the 1990’s and brought it back to San Francisco.

I used the set to make text for some of my mixed media work in the 1990’s. I liked it so much that it also was used to create the titles for my webpage back then. These sets are still out there and can be found online. I even found a free font based on it.

There is a new book by Barbara Levine called Finding Frida Kahlo. It’s a collection of Frida Kahlo’s reproduced letters and ephemera. The book is jammed with details for anyone who really is a fan of her life and work. I got excited to see that Frida Kahlo hand stamped her name on one of her suitcases. It was obvious that she used a Fulton Sign & Price Markers set. Yes, I like saying that Frida and I use some of the same tools. 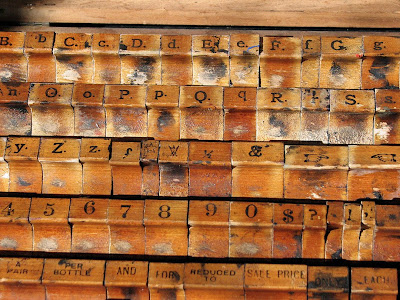