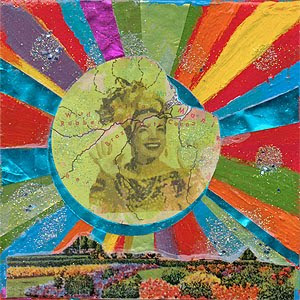 It’s Carmen Miranda’s Birthday! You would think it would be a national holiday in Brazil. Alas no, but at least she has a museum in Rio de Janeiro. It’s one of those places that I must visit someday. If anything, just to see the shoes. In my family we were raised to be fans, my mother even got to see her live at a nightclub. She was about 10. How very glamorous.

For many Americans, Carmen Miranda has been reduced to a kitsch icon. They often know her best from those old cartoon parodies. We have forgotten that she was Hollywood’s biggest box office draw during World War II. It’s no surprise she was so popular, her movies were silly, escapist and pure entertainment. I challenge anyone not to smile watching a Carmen Miranda movie. Her smile was infectious, she could dance, sing and the costumes, were, well, indescribable. The ability to make people laugh is gift and her gift was immense. One of the first things you see upon entering my apartment is the house altar. Carmen Miranda’s smile blesses me every time I return home.
Posted by Tofu at 8:14 PM