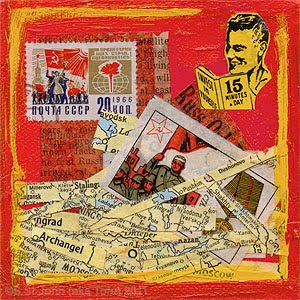 Today is a good day to remember nothing on a map is permanent. On this day in 1990, the Central Committee of the Soviet Communist party voted for the dissolution of the Soviet Union. I am endlessly fascinated by how maps change. I often use old, out of date maps in my work. Borders are one of the most permanent man-made things that are not actually permanent. Even a few years before it happened, the collapse of the Soviet Union was hard to imagine.

Ironically enough, we’ve just experienced a barrage of revisionist history tied into the 100th birthday of Ronald Reagan, or Raygun as many of us remember him. One would think today’s anniversary would be noted, if not celebrated by conservatives. But even for the perceived winners, the collapse of an empire can be unsettling. Particular an empire, that at 70, felt as solid and stable as an old Russian granny. Enough said, let’s just remember, maps do change from time to time.
Posted by Tofu at 7:53 PM