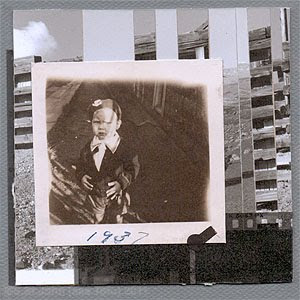 I have an old photo album of my grandmothers that spans about 20 years from the 1930’s to 1950’s. It starts with a period of teenage photos and ends when my own mother was about 10 years old. The album acts as a great timepiece of popular fashion and car culture. It also spans about 20 years in consumer photography. Every few years a new camera was purchased with a new type of film and a new style of printing. Ironically these old black and white photos have held up remarkably well. Their condition is great. The color snapshots and polaroids of my own childhood have faded and discolored.

I used to experiment with 35mm black and white photography but never even came close to learning what I was doing. I never took that class and developed my own film. This morning I found these ten year old photos from my first trip to Death Valley and mixed them in with one my grandmother took in 1937 (so the date says). Now I have to sort through the hundreds of digital images taken last week in the desert.
Posted by Tofu at 11:07 AM