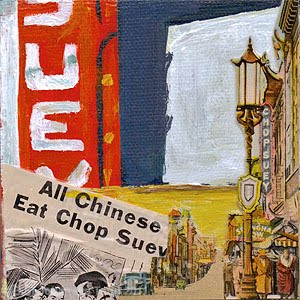 “All Chinese Eat Chop Suey.” Well according to an advertisement for Macmillan Petroleum in a 1953 issue of Popular Mechanics. That was a strange, old advertisement I came across the other day. Then yesterday, on a hunt for something else, I came to my stack of old San Francisco postcards. There was this image of San Francisco’s Chinatown with a Chop Suey restaurant. It’s an old postcard that tells us in the most dated language that: “Oriental costumes mingle with American, quaint Chinese patter is heard on all sides.”

I am old enough to remember chop suey. It’s that Americanized, Chinese food that was all we knew as Chinese food. It turns out, it was actually invented in China. The American version is based on an authentic Chinese dish. We like to think we know better now. We now know “good” Chinese food.

Nowadays it would be hard to find chop suey on a San Francisco menu. And still, San Francisco is a city with hundreds of mediocre Chinese restaurants. A few years back I finally discovered a really good one in the Inner Sunset called Nanking Road Bistro. I’ve eaten there a few times a month ever since. I really do love Chinese food. One time I asked the owner how he had pretty much the same menu as every Chinese restaurant in the City, yet his food was so much better. His explanation was really funny. He basically refuses to hire anyone who has ever worked in any other Chinese restaurant in the U.S. He went on to tell me that the owners of most Chinese restaurants won’t eat the food they serve. I knew I had found a good place, when I turned an older and very picky Chinese friend on to Nan King Road Bistro. He is a regular now as well.

As for chop suey, I do have a soft spot for a genre of cuisine I refer to as “cheap Chinese.” There is something to be said for bad, old time Chinese food. Best served in a red vinyl booth. But be wary, sometimes it just is really bad. I have encountered some crazy stuff traveling and the worst Chinese take away ever in, where else, England.

So today a homage to chop suey with a certain debt to Edward Hopper and the greatest chop suey painting of all time.
Posted by Tofu at 5:20 PM