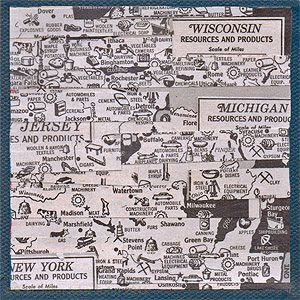 I spend a lot of time looking through and cutting up old maps. Even maps that are 40 or 50 years old can show a great deal of change. I have 40 year old road maps that show small towns that are now large suburban cities. For example, Walnut Creek, California was a small town on maps from the 1960’s. Then there are the small towns that have disappeared from many current maps. Small towns that were on maps because of a now disused railroad depot can be hard to find on a newer map. Comparing maps from different eras can be a history lesson.

Yesterday I was paging through an old atlas where each state also had a separate, black and white map titled Resources and Products. Those old-fashioned maps that had little symbols of miner’s pick axes, factories, corncobs, shoes, autos, etc. It harkens back to playing Game of the States and learning what was made in different places. In a modern atlas, I can’t imagine creating a map for each state to show what is manufactured in Massachusetts, Michigan, etc. As a country, the United States makes less and less.

It’s become a challenge to find locally made products, or even domestic ones, in the United States. It’s the same in many of the world’s wealthy nations. We have lost thousands of good paying, manufacturing jobs. We have cities and towns where moving away has been the only option to find work. The trade off is access to tons of cheap, imported consumer goods, often of dubious quality. Relatively speaking, stuff is cheap. We no longer repair things — we replace them. If it breaks, it goes to a landfill. The recent popularity of the television show Hoarders is something we might want worry about.

A few years ago I was running short of everyday glasses. They gradually break as you’re washing dishes, etc. I went to my neighborhood hardware store and bought a reasonably priced, decent quality set of new glasses for the kitchen. I opened the package and was surprised to see they were made in New Jersey. If we want to buy domestic products we’re going to have to look hard for them. The more of us who do, the more demand there will be. It could be like the way consumers drove up the demand for organic food. 20 years ago, organic produce was a challenge to find in many places. Today Walmart is the largest purveyor of organic food in the world. That is the same Walmart full of cheap, imported stuff.

People in China and India need those jobs making stuff (and they could keep quite busy making stuff for local markets). We need to start making stuff here again too. If we want to put those little symbols of products back on our map, we have to start seeking our products made in our own country.