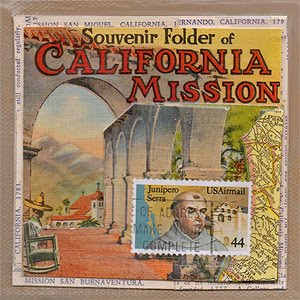 I have been to Carmel. It was resurrected from ruins and, while I am glad it was rebuilt, feels rather sterile and artificial. Nearby is Soledad. I went once and sadly, found adobe walls under tarps melting in a winter rain. Nearby is San Juan Bautista. It’s one of my favorites. I like the sense of years of continual usage and the historically preserved town. It remains a particular active church. A visit there inspired my Hometowns piece. One of my more significant works to date. I also love the ruins of the abandoned missions in New Mexico. They inspired another series of paintings. In New Mexico the Native Americans were far less welcoming of the Spanish missionaries.

Many of the missions have had towns grown around them like in San Luis Obispo and Santa Barbara. But I really like the more isolated missions for a more “authentic” experience. La Purisma is another favorite down near Lompoc. It’s one of only two California missions managed as a state park. It was well restored as a WPA project back in the 1930s.

On Saturday I was at the Oakland Museum. They currently have a large show of art from Missions in the U.S. and Mexico. And while I appreciate the opportunity to see all those bloody, bloody saints and scenes of martyrdom (including noses being sliced off – ewww!), it is not the same as experiencing the work in the missions. The dust, the smell of candles and incense, the inconsistent lighting all seem the way it is meant to experience the statues and paintings.