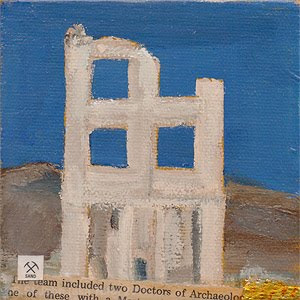 I have visited ruins all over Europe and throughout the Southwest U.S. But there is something different about ghost towns. Rhyolite (near Death Valley just over the Nevada State Line) and Bodie (on the edge of California north of Mono Lake) are my two favorites. I first visited Rhyolite over 10 years ago and have been going back every time I am nearby. I was just back in Rhyolite a month ago. I look and keep telling myself there is less and less of the old Cook Bank every time I go. The ruin is even fenced off for safety now. When I returned home, I compared old photos I took a few years ago and was able to confirm the ongoing decay.

The history surrounding ghost towns is something I find compelling. I attribute it to their stories of rapid expansion and near sudden demise. How so much could happen in a place and draw so many people in. How a town grew with a sense of permanency only to be abandoned a decade or so later. Perhaps it is because I live in one of those towns that started as a boom town. San Francisco has also survived its series of ups and downs and calamities. But our setting,on a beautiful, and conveniently located, bay has made us always stick around and, when necessary, rebuild.

Now I see another road trip to Bodie in my future.