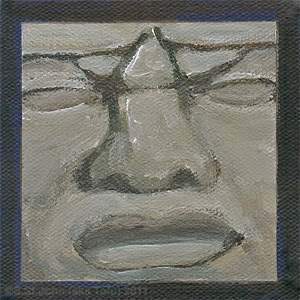 Today we went to see the big giant heads at the de Young. When you think of the Olmec, it’s the first thing that comes to mind. And yes, a big giant head greets you as you enter the special exhibit. It’s grand, it’s imposing, and you could leave after that and feel quite satisfied with your museum outing. But there is so much more to the show. I may have painted a big Olmec face when I got home, but what I really wanted to do is learn to carve jadeite and make some ceremonial axe heads. The treasure trove of jadeite and serpentine carvings is amazing. All safely behind glass, but I’d love to be able to handle them. They just beg to be touched.

The exhibit is another example of why you need to see art in person when you have the opportunity. The books and photos just can’t convey the feeling you get when you see the work in person. I avoid the overused word exquisite. The work in this show well deserves to be called exquisite. If it were a new body of contemporary work, it would be fantastic in itself. At 3,000 years old, it’s rather amazing. When it comes to antiquities, an Olmec show is not going to draw the crowds that Roman, Greek or Egyptian work would, and it’s shame. From a pure artistic point of view, the Olmec accomplished things that wouldn’t be matched for thousands of years.

At the risk of sounding like a cheesy “History” Channel program, one really wonders what was going on down in Mexico 3,000 years ago. Where did the Olmec go or who came to them? There are so many different faces in the carving that you can’t help but see Asians, Polynesians, Africans and Europeans. Small figures that look at times like a fusion of the world’s cultures. There’s a pendant that looks Maori, ceramics that look Phoenician and I might have seen a small Buddha. Many of the pieces could be taken out of the context of the exhibit and then people could be asked to guess where they were from. The answers would literally be all over the map.
Posted by Tofu at 11:39 AM