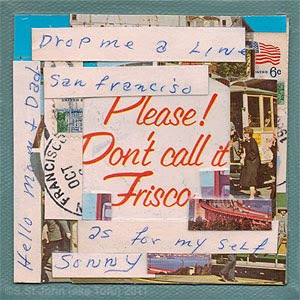 In October 1968 Sonny Gaspar sent a San Francisco postcard to his parents in Pinehurst, Mass. Somehow, this postcard ended up in one of my I’ll-use-this-for-an-art-project-someday piles. So here it is. Sonny didn’t have much to say. He was staying with his pal Tony Mendoza and could be reached care of the Plaza Hotel at 988 Howard Street. The hotel’s sounds swank, but I doubt it was. There is a new apartment building on Howard Street now. Three weeks after Sonny sent the postcard he said he would be off to Los Angeles. Did he go? Did he fall in love with our City and stay like so many of us have? Was he having a wild time in North Beach? The Haight? Had he let his grow long? We’ll never know. There is so much our imaginations could read into the card. The only thing Sonny was telling mom and dad was, “Please! Don’t call it Frisco.”