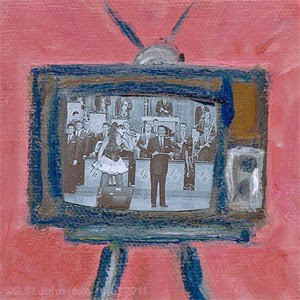 It seems everyone likes to claim they have eclectic music tastes. Really? It is one thing to have a few types of genres you like to listen to, but that is not necessarily eclectic. Eclectic is gambling on the oddest things you could find on vinyl back in the old days in Cambridge. Music that was even too strange for college radio stations. Would you buy a boxed set Ukrainian opera in Filene’s basement? Something so awful they couldn’t even sell it at a department store in Kiev. The internet makes it all so much easier for those of us who truly appreciate the eclectic. What the neighbors must wonder at times.

If we were to have a holiday called Eclectic Music Day – today would be it. Today’s birthdays include Flaco Jiminez, Bobby McFerrin, Nina Hagen and Lawrence Welk. I won’t say I like I like Lawrence Welk – but I sometimes can’t resist getting sucked in while channel surfing and PBS is running the old shows. Parodies never can do it justice, it’s so, so wonderfully strange.

When I realized the mashup of today’s birthdays I just had a vision of Nina Hagen appearing on the Lawrence Welk Show. Nina Hagen, The Queen of Punk who won her crown when she played with herself back on live Austrian TV back in the 1970’s. What happened to the swivel chair she sat in? Is it in a museum somewhere?

Maybe Nina Hagen would have been booked on the Lawrence Welk Show accidentally. I always regret not going to her concert appearance back in Providence in the early 1980’s. It was legendary. The show sold out and was full of nice kids from Brown come to see “Nina” the German girl who sand about the Luftballoons. Ooops, wrong Nina.

So, do the day proud, and go listen to something eclectic.
Posted by Tofu at 12:04 PM