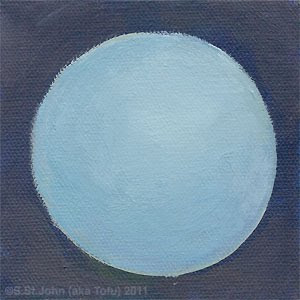 Quiet, cool and blue, Uranus was just was mistaken for a distant until this day 230 years ago when it was “discovered” by Sir William Herschel while using a telescope in his garden. Uranus was named for the ancient god of the sky. In 189 the newly discovered element of uranium was named for Uranus. Astrologically speaking, Uranus is the planet of individuality and new and unconventional ideas (I like that). Its discovery coincided with the time of the American and French Revolutions.
Posted by Tofu at 2:30 PM