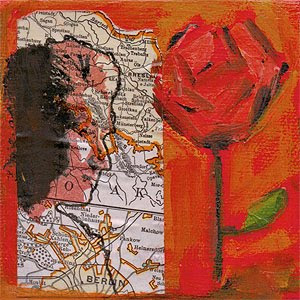 I find it interesting to learn about people who were famous and considered very important during their lifetimes yet somehow have been nearly written out of history. They might have been artists, composers, writers or political leaders. Rosa Luxemburg is one of those “forgotten” historical figures. A century ago, she was one of the world’s most popular and influential political leaders.

When we read a list of the names of major 20th Century leaders, the list includes people like Martin Luther King, Gandhi, Mao, Churchill, Lenin, etc., Rosa Luxemburg most definitely should be included. In 2011 one probably needs to be a fairly serious scholar to be familiar with her legacy. Even all my lefty college professors never mentioned her. I first learned about Rosa Luxemburg from Margarethe von Trotta’s 1986 film.

During her lifetime, Rosa Luxemburg was big — very big. She attracted huge crowds wherever she spoke. I’ve often heard it repeated that she was as big as Lenin. She was a socialist thinker, militant anti-war activist and a major leader in worker’s revolutionary movements in Europe. After World War I, Rosa Luxemburg was assassinated in January 1919 in Berlin during the chaos of the attempted socialist revolution.

One could write a thesis (someone probably has) on why history has forgotten Rosa Luxemburg. And there is that line about history being written by the victors, but ultimately I feel Rosa Luxemburg has been disregarded because of her gender. No matter the ideology, we have a long way to go to recognize women as leaders equal to men.

In the post-Soviet world, many are quick to disregard any thinking with a hint of Marxism. I think it’s quite a mistake to throw out the red baby with the bathwater. There is a great deal to learn from history and about the state of the current world by reading philosophers like Luxemburg. Some of the things Rosa Luxemburg wrote a century ago are quite relevant today. Even a quick search online finds a quote of hers that could just as well be about Egypt or Libya today as it was about Europe a century ago: