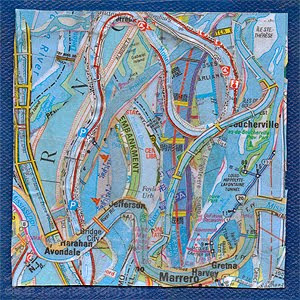 First you cut the land area out of maps and essentially only leave the rivers. Then you layer all the rivers together. The result is something that looks almost anatomical. The rivers appear to be a section of the human body’s veins and muscles. When I did this piece for the 2011 Project that result wasn’t intended or expected. And like many artistic experiments, I am quite pleased with what happened.

Rivers are an integral part of all human history. Their flood plains provided some of the earliest gardens that were the beginnings of agriculture. Rivers moved people, goods and ideas. Towns, cities and empires grew on rivers. The flow of rivers created industry. It then helped generate electricity to power more industry. Rivers have always been places were deities dwelled.

California’s rivers are not some of the world’s most impressive. Most are small and scrappy, they lose altitude fast while making a quick run towards the Pacific. But, if not for the American River scouring the mountains and exposing gold, California would be a very different place.